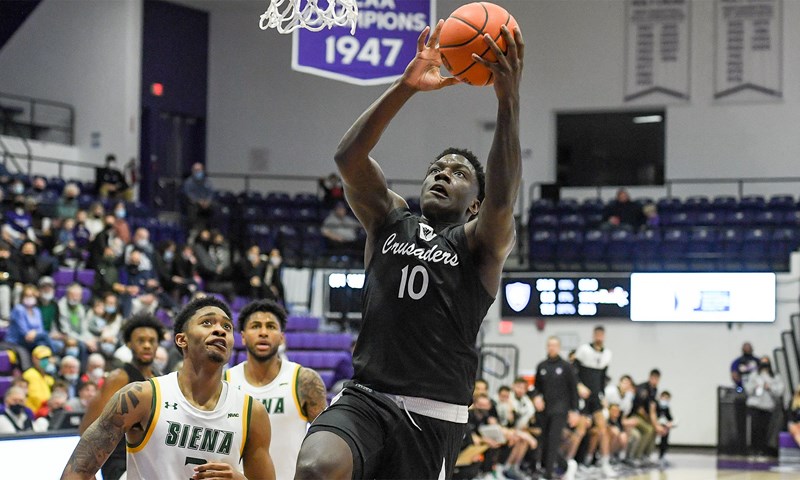 THE SCORE OF THE BOX
WEST POINT, NY –Second-year guard Jalen Rucker scored a game-high 22 points with five rebounds and four assists to help Army West Point go undefeated in the league with a 77-55 victory over Lehigh.
* Rucker shot 8 of 15 from the floor and 2 of 4 from beyond the arc to reach the first 20 points in each of the Black Knights’ first three games.
* West Point senior army guard Aaron Duhart finished with 11 points, and second-year forward Charlie Peterson added 10 points and seven rebounds.
* The Black Knights shot 54% from the ground and 45.5% from 3 points and never trailed against the Mountain Hawks.
* Junior goaltender Evan Taylor and first-year goaltender Keith Higgins Jr each scored 13 points to lead Lehigh, while second-year center Dominic Parolin came off the bench to add 10 points, all in the second half.
* The Mountain Hawks’ defense forced 16 turnovers, turning them into 22 points.
SUMMARY: LEHIGH | ARMY WEST POINT

THE SCORE OF THE BOX
WORCESTER, Mass. –Senior forward Gerrale Gates posted his fifth double-double of the season with 27 points and 14 rebounds to lead Holy Cross to Lafayette, 79-74, at the Hart Center.
* The Leopards were leading up to 11 points in the second half, but Holy Cross used an 11-0 streak in a four-minute streak at the halfway point to take the lead for good. The Crusaders scored 52 of their 79 points in the paint.
* Gates tied his career-high 27 points on 11 of 18 shots from the rush, while five of his career-high 14 rebounds came on the offensive glass.
* Second-year goaltender Bo Montgomery scored a career-high 21 of 8 of 11 shots from the floor, including 2 of 2 from beyond the arc. Second-year forward Judson Martindale added 10 points to the Crusaders.
* Lafayette full-back Tyrone Perry finished with a team-high 18 points and five assists in the Leopards’ League opener of the season.
* Junior forward Neal Quinn added 16 points, eight rebounds and three assists, while junior forward Leo O’Boyle and freshman CJ Fulton scored 11 and 10 points respectively.
SUMMARY: HOLY CROSS | LAFAYETTE

THE SCORE OF THE BOX
LEWISBOURG, Pennsylvania. –Junior forward Daniel Deaver came off the bench to score a high 20 points to help the Navy go undefeated in the league with a 73-55 victory over Bucknell at the Sojka Pavilion on Friday night.
* Deaver shot 8 for 8 from the ground and 1 for 1 from beyond the arc. The Mids bench contributed 41 of the team’s 73 points, while junior guard Patrick Dorsey and junior forward Jaylen Walker contributed nine and eight points, respectively.
* Senior Navy Guard John Carter Jr. added 18 points, shooting 11 for 14 from the charity strip.
* The Mids’ defense kept the Bison at 39.6 percent from shots on the ground and 29.4 percent from 3 points.
* Bucknell junior guard Xander Rice scored 14 points, a team record, while freshman Elvin Edmonds IV added 12 points.
* Second-year center Andre Screen finished with 11 points, seven rebounds and two blocks for the Bison.
* The Bison led by eight points in the first half, but Navy tied the score at 32 before the break. Navy got off to a quick start in the second half, opening a 10-point lead in the 12th minute to take control of the game.
SUMMARY: NAVY | BUCKNELL

AMERICAN EAGLES (4-9, 0-1 PL) AT COLGATE RAIDERS (4-10, 0-2 PL)
Cotterell Court / Hamilton, NY 7 p.m. (ESPN +)
HAMILTON, NY – The Patriot League men’s basketball game between American and Colgate, originally scheduled for Friday, January 7, has been postponed due to COVID protocols within the US men’s basketball program. The game between the Eagles and the Raiders will be rescheduled until Monday, February 21, with game time to be determined at a later date.

ABOUT THE LEAGUE OF PATRIOTS